Emails sent to you weekly with the latest updates on the law.

In light of the recent Full Lockdown Movement Control Order 3.0, our CLJ offices will be temporarily closed from 1 June 2021 until further notice.

Rest assured, our team will be working remotely to continue to serve and bring you the latest in law through our digital platforms. Should you require any assistance, please feel free to contact us via the channels detailed below.

Do stay tuned to our social media channels and websites for the current updates on our webinars and exciting new offerings to keep you engaged during these unprecedented times.

In the meantime, stay healthy and safe as we work together towards flattening the Covid-19 curve. 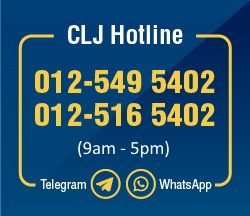