Issues relating to housing development matters is governed by rules of procedure which are intricate and labyrinthine in nature. For those involved in this area of practice may see it as a daunting task that oftentimes requires a herculean effort on their part. The objective of this specialist webinar series is to discuss, among others, on the salient provisions under the Housing Development Act 1966, handling dispute resolutions between purchasers and developers, Management Corporations and defect claims. That aside, the speaker will also highlight about the new norm in resolving disputes between parties. 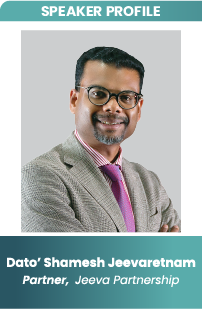 Dato’ Shamesh Jeevaretnam is an active litigator and a certified arbitrator. Dato’ is currently the President of the Home Buyers Tribunal, a division of the Housing and Local Government Ministry which is a dispute resolution forum between purchasers and developers. Having been in legal practice for approximately two decades, Dato’ Shamesh has represented various corporations and multinationals in contentious and non-contentious matters. His practice has a civil and commercial litigation flavour mixed with intellectual property. He has extensive experience in dealing with commercial disputes and often appears at the High Court, Court of Appeal and Federal Court. He has represented various joint management bodies, management corporations and developers in suits involving late delivery, property management disputes, maintenance claims and disputes pertaining to common area. 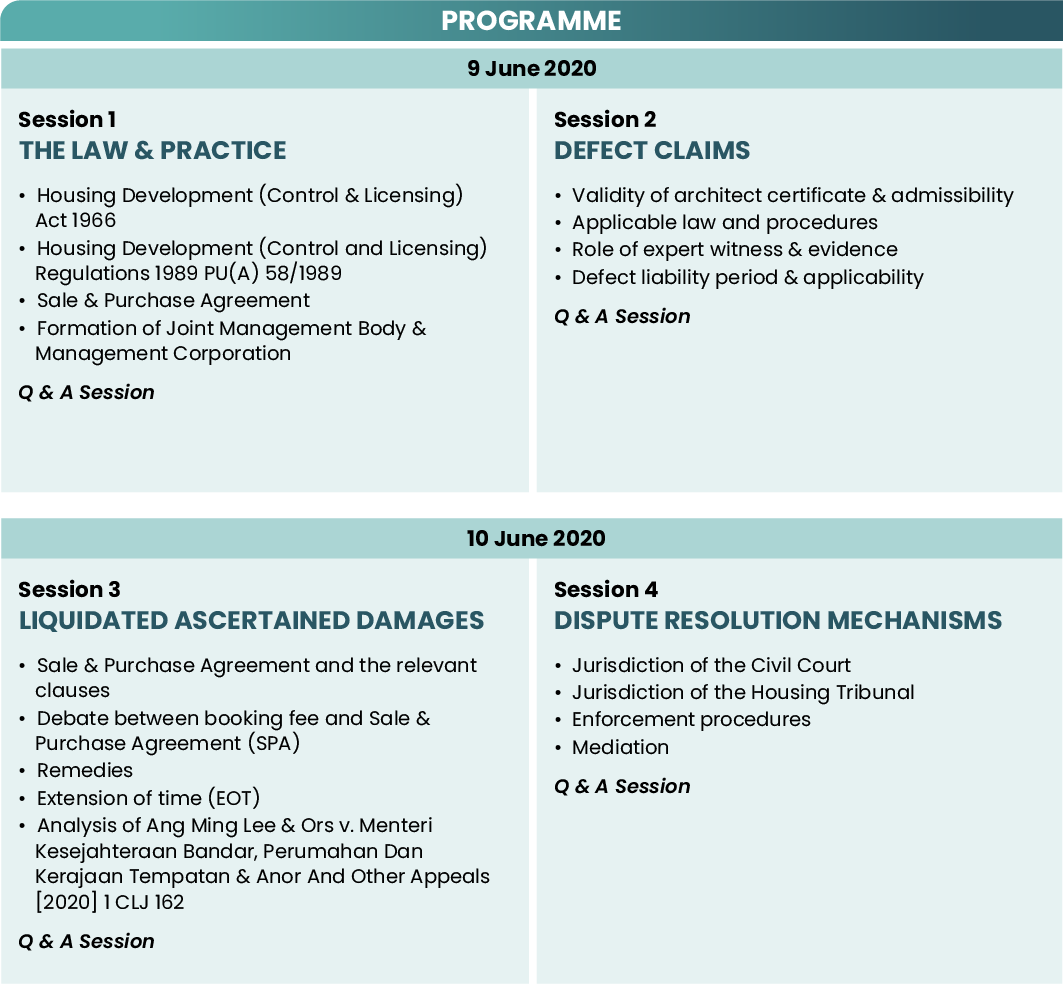 A STEP-BY-STEP GUIDE TO JOIN THE CLJ WEBINAR

(1) You will be provided a link to the CLJ Webinar once your registration has been confirmed. (2) We are using Zoom for the CLJ Webinar. You are advised to download the Zoom Client for Meetings app on your laptop. You may also download the Zoom mobile app for iPhone and Android. (3) Please ensure that you have a strong internet connection. You are encouraged to use the earpiece with microphone for clarity. (4) You may post your questions at any time throughout the session by using the Q&A button. (5) A digital E-Certificate will be sent via e-mail to registered participants within 7 (seven) working days from the date of the respective Webinar session. (6) The Speaker Notes will be provided via e-mail to participants within 3 (three) working days from the date of the respective Webinar Session.

(1) Do not share the link (including meeting ID and password) with any person(s). Each registered paticipant will be given access to the Webinar on per session per device basis. (2) Sharing of individual access information by whatsoever means is strictly prohibited at all times. Host reserves the right to disable access to duplicate logins during webinar session without prior notice. (3) Registered participants who share their individual access information will risk being denied issuance of CPD Points and E Certificate. (4) Any form of screen recording to any particular device(s), sharing or reproducing the content of the CLJ Webinar in audio, video, writing, etc, on any platform is strictly prohibited. The organisers view this as a serious breach and violation of copyright and will not hesitate to hold the person or entity liable for any dissemination of information or recordings being made from the Webinar. (5) Be courteous when posting questions to our speaker. Participant(s) may be removed from CLJ Webinar by our Host without any prior notice if it is found that the participant has posted any indecent or unwanted language or violated terms of use during the Webinar session. (6) The information provided by our speaker vide the Webinar is not intended as legal advice. The Webinar is for educational and informative purposes only. (7) By registering for this Webinar, you accept and agree to abide by the above mentioned Terms and Conditions.

The Organiser will not refund the payment made by the participant(s) for the respective session if the participant(s) decide to cancel their registration or in the event of “No Show”. You may substitute an alternative delegate(s) by notifying CLJ at least 2 (two) working days before the date of the Webinar session.

For CLJ Online Store, the e-commerce unit has started operation this year 2020. With an extensive collection of book titles across various topics and categories supported with easy-to-search function for online browsing.